Tentatively stepping into outside coaching

I want to tell you about my experience of outdoors coaching.
It may come as no surprise that I enjoy being indoors. Being curled up with a good book, wrapped in a blanket, a steaming hot chocolate next to me and the sound of rain lashing against the window pane is my idea of bliss (sadly since having young children this happens much less than I would like, apart from the rain bit as I do live in the UK!).
However, I have also always enjoyed the outdoors. I'm not a climber or hiker but have enjoyed many windswept walks across sea fronts; meanders around Penistone crags (invoking my inner Cathy); and cycle rides around parks filled with deer.
When I was a child I used to collect acorns. I would fill the tops with water to make fairy cups and mush the remainder to make squirrel food or 'potions'. I've grown vegetables as long as I remember - some years I have even been successful. I take my yoga practice outside when the weather permits and I spend most weekends walking the children through the woods in the hope that the stillness rubs off on them. 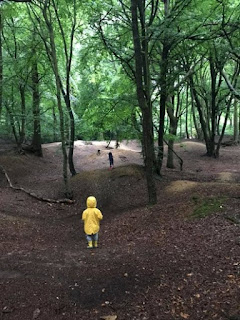 I have long been aware of the benefits of being outdoors and I recently had the opportunity to find out how I could combine this with my coaching. I have previously held meetings and coaching sessions outdoors on campus before but it has been an afterthought - the weather was particularly nice or I was unable to find a suitable room. I decided to find out how I could coach outdoors with intention.
I'd been trying to attend Claire Bradshaw's Outdoor Coaching programme for several years but couldn't logistically make it happen. An unexpected benefit of the pandemic has meant that I could finally attend - albeit virtually.
Over the three week course, I was able to reflect on the different types of outdoor space and the physical, emotional and cognitive effects it may have on both myself and those I coach. I considered the impact of coaching while being apart - over the phone or via online meetings. I discovered how the environment plays an active, rather than a passive role. Importantly, I learned about the extra requirements needed when contracting and thinking about the practicalities - we don't want to be shivering with cold or worried about falling when we should be focussed on listening and thinking! 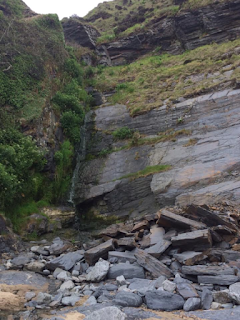 While the course did open my eyes to just how much extra work and consideration goes into coaching outdoors, it has whetted my appetite to keep learning more about it and include it in my toolbox of skills. Since then I have attended a Street Wisdom event which I may blog about next. I have also presented my experiences to the coaching community within my workplace. With social distancing making being in a close space far from ideal, this outdoors coaching may just have legs*.
Would you consider being coached or having meetings outside? Perhaps it's something you do already? If so, what was it like?
*I'm so sorry I couldn't help myself!
Written by Sarah Wolfenden at Sunday, October 11, 2020 No comments:

When stationery becomes a sign of optimism and hope

Have you bought a diary for the upcoming academic year? I've seen on social media people saying they aren't going to bother. Mine arrived last week.
When you work in education it can feel like you get chance to start fresh twice, not only in January but also in September. I prefer the September one - it comes with snuggly jumpers, crisp walks and without the barrage of 'sort your life out this second' adverts.
September brings with it a new academic year with its fresh Term 1. This often goes hand in hand with a new diary, perhaps a new set of pens too. For the last few years I have used the bullet journal system and moved from Hemingway’s favourite, the Moleskine, to Leuchtturm for the dots, colours and slightly wider pages. This year I am trying out the Ottergamis dotted notebook. It’s thicker, has templates (not a deal-breaker) and has a cute otter logo on the front (this possibly is a deal breaker). It is a thing of beauty and has gorgeously thick paper. Unfortunately, I’ve just found out it doesn’t have page numbers. 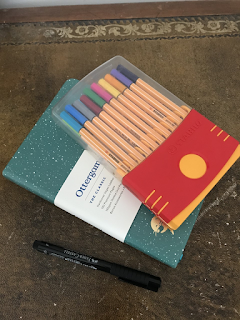 Anyhow, perhaps I am being naively unrealistic in buying a new diary for the 20/21 academic year when the 19/21 still has quite a few empty pages. I’m not quite sure why they are so empty when I was actually busier than before. I didn’t think that was possible. This whole ‘going back to work’ business sounds ridiculous (and insulting) when I, and many like me have been working doubly hard to support our students while home-schooling at the same time - and feeling like we’re doing neither well enough.
Perhaps it feels safe to carry on with same routines of buying stationery to see in the new academic year. There’s safety in traditions. This year it feels brave and optimistic to say I will carry on - despite everything this year has thrown up regarding work, relationships and health. For now, I am in the fortunate position of being in a new job with a number of opportunities in front of me.
This year was going to be the year I found myself after having my two children. I arranged passports so we could travel. I seriously considered world schooling when my job prospects didn’t look promising. I was determined. I was going to coach, do yoga etc. Then the pandemic hit. I got sick. I obviously don’t know if it was the dreaded COVID but it was incredibly frightening. Luckily, I recovered and found that while it was incredibly stressful trying to work and look after two small children there were numerous positives; e.g. not being stuck on the motorway worried I was going to miss the after-school childcare pickup.
Now we have to return. I’m trying to phase it in slowly as my children don’t like changes in routines. Despite still waking up at 5 or 6 every morning, I know I’m going to miss mornings not being too stressful and having all my meal-times with my children. I’m concerned about them getting ill and, besides the obvious worry about their health, the impact this has on everything else.
One thing I am looking forward to though is being able to hear myself think!
What is going to be different for you in the next few months? What are you doing to prepare for it? Feel free to show me your new stationery pictures!
Written by Sarah Wolfenden at Friday, September 04, 2020 No comments:

Taking responsibility as an educator during Mental Health Awareness Week

Staff and students within the Higher Education sector are facing pressure like they've never known it before. In timely fashion on Monday this week, Universities UK launched an updated version of StepChange - a framework for what mentally healthy universities look like. Mental health is something to be preserved all year round not just for once a week and I think it's a good step that underlying structures are now being considered.

Even though we aren't yet quite sure whether we have escaped relatively unscathed (I imagine not many of us have) we are already pondering what next term may look like and how we might support our staff and students in what has already become an overused term - the 'new normal'. I'm hoping it will be more personalised, more flexible and more inclusive.

Despite much being out of our control, there is still plenty within it. Therefore, we all have a responsibility for ourselves and for others in our care. It may not be perfect, far from it, but as Brené Brown says 'we are doing the best we can with the tools we have'.

Some of what I'm doing for others:

Some of what I'm doing for myself:

What about you? How are you acknowledging your own mental health and that of your colleagues and students?

Written by Sarah Wolfenden at Tuesday, May 19, 2020 No comments: