"By “open access” to [peer-reviewed research literature], we mean its free availability on the public internet, permitting any users to read, download, copy, distribute, print, search, or link to the full texts of these articles, crawl them for indexing, pass them as data to software, or use them for any other lawful purpose, without financial, legal, or technical barriers other than those inseparable from gaining access to the internet itself. The only constraint on reproduction and distribution, and the only role for copyright in this domain, should be to give authors control over the integrity of their work and the right to be properly acknowledged and cited."


This is the definition of open access devised by the Budapest Open Access Initiative and, according to them, if it doesn't fit this model then it isn't open access. This is how Ross Mounce, a PhD student from Bath University and Open Knowledge Foundation “Panton Fellow” opened his speech at the London Information and Knowledge Exchange (LIKE) 45th event. While studying, Ross has come across numerous interruptions and barriers to his research which he thinks would not have been the case if access to information was more easily available. As a researcher, it is important to have access to all the previous research carried out on a topic to avoid duplication and wasting both time and funds. It is also important to have access to both data and information so that experiments are transparent and possible to replicate, decreasing the risk of fraud.

This led us onto Velichka Dimitrov's, an OpenEconomics coordinator, talk, the second of the nights three presenters. Velichka opened with a well known quote from Isaac Newton's letters:

This quote epitomises the raison d'etre of research - to use the knowledge of what has gone before and build upon it for the future. 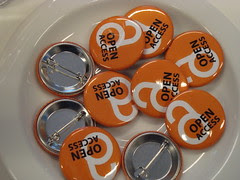 If research data is available then it is replicable and verifiable: it is precisely for this reason that the American Economic Association  have made it their policy to only publish papers whose authors allow their data to be available. Velichka's presentation led to discussions about whether open access would solve the problems referred to or whether there also needs to be a shift in the attitudes of universities and those who work in them. There was some suggestion that academics, rather than let their data and findings be openly accessible, would rather either choose select journal titles to be published in due to their perceived status or keep it under wraps so they can potentially publish further research in the future while preventing others from doing so at the same time. We were left with the quote from someone in the room that "academic culture is not suited to modernity".

To counter this view, our final presenter for the evening was John Murtagh, a Project Officer for Training in Data Management at University of East London. John spoke to us about open data and research data management (RDM) from a librarian's point of view, starting with a breakdown of the many of the acronyms which tie into this area. He then went onto explain the rationale behind the push to manage research data, namely that it is was a financial decision as the ESPRC funding body gave the ultimatum to universities that they would no longer fund research if it couldn't be proven how the data was being organised and preserved. However, it was also to prevent cases like Diederik Stapel, the psychologist found to have faked much of his data.

John told us that RDM sits easily within libraries because librarians are impartial so don't have an agenda linked to funding and also because they are good collaborators which is necessary in this type of work. As part of the ongoing project at UEL, they provide tailored training for the individual departments as well as a generic workshop for the Graduate School and an online course for the subject librarians who are instrumental at getting their departments on board.

Overall, and like most LIKE events,  it was a very interesting and informative evening and I left feeling more knowledgeable about the issues than before. As I currently work in a university and have come across many of the issues that the speakers, especially Ross, spoke about, I think it will be fascinating to see how it develops. Even though there is currently strong resistance to open access being accepted, I can see that the momentum is growing for it and that it really can't come soon enough.